Too often do I see game developers, especially new ones, dealing with player feedback in the worst way possible. They either reply to every bad comment in a very bad manner, or they become depressed and take every bad comment as a sign of a personal failure on their side.

I strongly believe both approaches are bad. You will always get bad comments and feedback from players, regardless of how good your game is. There is no way of pleasing everyone, so you should only consider well-written, constructive comments, which will often stand out from others, as the other users will react to them if the platform allows it.

This is just a collection of my thoughts and opinions on the topic, and it comes from my observations of comments made by my players, targeted at my games, which are at this point mostly in the casual part of the industry.

This article might not be applicable to all types of apps, games and audiences, but I firmly believe that there are some recurring patterns in every area, that we all need to learn from.

We are problem solvers, and as such, we love to talk about problems

People tend to express their anger and disappointment more often than their delight and satisfaction.

Consider a discussion that you had with your friends and family in the past. How often did you say something like: “My boss told me I did a great job today!”

What would the most probable response for that be? Very likely, something along the lines of “Good for you, having a great boss in a cool company.” The discussion pretty much ends there. There really isn’t anything else left to say.

Consider this scenario – you start a discussion with “I got scolded by my boss today for doing a good thing.”

There is a whole array of possible responses to that, and discussion that started can stretch out for hours. It will probably induce talks about him being unqualified and getting a job from his grandfather’s friend, and it will end up in discussions about world leadership, healthcare system and ice bucket challenge.

People are problem solvers by nature. They love discussing problems, as they encounter hundreds of them in their everyday lives. Problems make them think, they induce discussions, and finding and pointing out problems makes people feel smart.

Talking about good things gets boring fast, and is likely to have a boring response. Thus people avoid doing that unless they are really satisfied with the topic at hand. 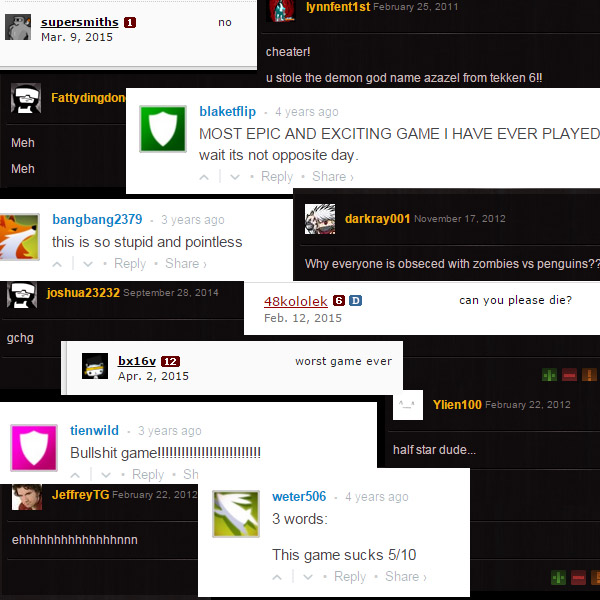 Some of the bad comments I have collected throughout the years.

You honestly need to annoy a player just a little bit to get a negative comment, but you must really make him enjoy your game in order to leave a positive comment on your game or app.

You must not blame your players or hate on them for simply being human.

Players don’t have a clue about how games are made

Well, most of them don’t. Most of them are not game developers, coders, artists, musicians, or game designers. They can’t even imagine how much hard work goes into making of a single game.

How long it takes, how many sleepless nights you endured, how many lines and lines of code you debugged – that is no concern of an average player, and neither it should be. Their only concern is if the game is fun or not, and if it lives up to their expectations once they play it.

Have this in mind when you are reading their feedback. Don’t try to teach them how hard it is to make a game, and how crappy your life is during the process. They couldn’t care less. They came to have fun and relax, not to consider your problems and downfalls, as they probably have enough of their own.

Most feedback is usually worthless

Players are not a bunch of QA testers. They are not getting paid to provide valuable feedback and most of them don’t even know how to do so. Mostly, your feedback will consist of “This game sucks!” or “This game rules!” types of comments. You can’t really use those to improve your knowledge of game design and player’s expectations, as they don’t provide any information about what in the game causes those feelings for your players.

Although the rating is bad, this is how constructive feedback looks.

It is crucial for you to be able to filter player feedback in any way possible, because there are lots of hidden gems out there, which are hard to find because of the overwhelming noise of bad comments. If nothing else, just go through them and search for the right ones. It takes some time, but it will be worth it.

When you read a hundred “This game sucks.” comments on a game that you worked on for months, you might feel a bit down. Don’t.

You have just released a game and you got some feedback. That is a success by itself, and you should be proud of yourself, especially if you are just starting out. Most people that get into game development don’t ever get a chance to hear what players think of their project, and actually releasing a game falls in the “believe it or not” category for them.

What is done is done. Your next game will be better, especially if you try harder and keep an open mind.

Secondly, having lots of bad comments doesn’t necessarily mean that your game is all that bad. It might be that you have just targeted a wrong audience with it, or that you made the game too hard at start so people weren’t able to see the best part of it. Maybe you just made a bad tutorial and people had no clue what they are doing.

Find feedback that points out the problem, and learn from it. If you strongly believe the game is good, make a sequel or a spin-off with tweaks and features based on that feedback.

I had such a good time reading some of the comments on my games. You should have a good time reading them too, regardless of the nature of the feedback. You can never truly anticipate how players will react to your game, or what kind of experience they will draw from it.

You can guess it for most, but some people are simply different, and they will either completely miss the point (which is bad), or have an experience so different that you will never be able to wrap your head around how they managed to feel that during their playthrough of your game.

In a way, games are a form of art, and art is something meant to be experienced personally.

Let me give you an example.

I have published a game called Average Joe a few years back. It is a game about a simple peasant Joe that was the only one brave enough to answer the king’s call for heroes when an evil wizard threatened the whole kingdom.

So, once you beat the game, you get to marry the princess, and there is a cutscene saying: “After he saved his kingdom, Joe married the princess and they lived happily ever after.”

Then cutscene switches and we can see the wizard hiding behind the throne, and a text “Or did they?” is written on the bottom of the screen.

The whole game is very kid friendly and cartoony, there is nothing scary or creepy in the game at all, but one player commented:

I played this late at night and the wizard kinda scared me at the end!”

I laughed so hard at this comment, and it surprised the hell out of me. You can never fully predict how some people will respond to your game. 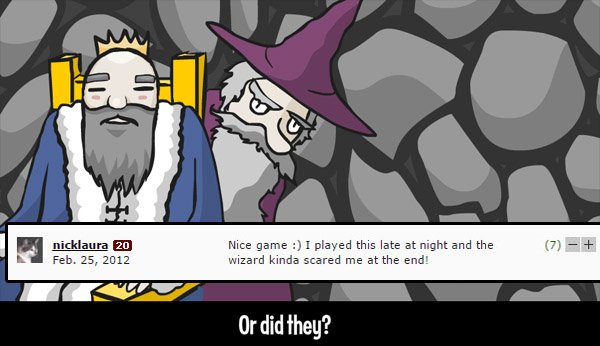 On a side note, it is amazing how deeply you can immerse the player in a game’s universe even with a small and cartoony game like this, so they actually sense fear, one of the strongest emotions there is, while playing. I am really eager to see what range of emotions our horror game project will be able to awaken in the minds of our players.

But, that might be a topic for another article, so let’s stay on track here.

Once you have published the game, you are basically asking for feedback. You will get it. You might not like it, but that is life, you will have to deal with it.

Take it like a professional, learn from your players, respond to their feedback politely and with respect.

One who gives respect, gets respect, and your players will love you for it. Respect both critics and fans. Words “Thank you for your feedback, we will consider it.” go a long way.

You have to be completely objective when you are responding to feedback. There is no place for your feelings there. Sure, some comments are very rude and full of hate, but you don’t want to reply in the same manner. It’s better not to reply, than to reply with disrespect and hate.

Most of the times, community will downvote the worst feedback, and they will defend your game if they like it. Let them do that, but don’t encourage it or take sides. You must show love to all your players, no matter how disrespectful they are. They might just be kids, after all. One day they might understand that hard work should deserve respect by itself, but right now, that is the last thing on their mind.

In the end, you can never know who is hiding behind those nicknames, and what their story is. Your game might have insulted them on a personal level, or shook them up in some unimaginable way. Game is an experience. If a cartoony wizard can instill fear into someone, then basically anything can happen to a player while he is playing your game.

Your players are your audience, your source of income and popularity. You make your games for them. Whether you admit it or not, you care about them and their opinion. You simply can’t insult them, be disrespectful, or call them names. It will start an avalanche that won’t be easy to stop.

Remember Phil Fish? His whole career has been marked by poor interaction with his community. He has called people names, insulted them on a personal level, waged wars against his community and told certain people to kill themselves. The community has basically destroyed him in return. Almost all of his accounts got hacked, all sorts of private data about him and his company were exposed, and he ended up quitting the industry and trying to sell IP of his game.

Your community is here to help you out, if you let it. Love your community. Learn from your feedback. Don’t judge. Don’t throw your personal feelings into the mix. Don’t hate on players because they are human.

It might not be easy from time to time, but no one ever said that game development is all sunshine and rainbows. Just remember at all times that you are a professional, and you need to act like one in order to be one.